Over two gruelling days, contested through Twelve fast & furious stages and full of all manner of bumps, jumps and high-speed sections, it was New York based Barry McKenna and Co-Driver Leon Jordan who showed some scintillating pace to bring his Ford Fiesta R5 home in 1st place in the 2018 CFF Group Jim Walsh Cork Forest Rally, ahead of one of the strongest Fields ever seen on an Irish Forestry Event.

A double round of the Valvoline Forest Rally Championship, the field of near 90 cars left Mallow on Saturday morning destined for a string of stages to the east of the town. Straight away, it was a trio of Fiesta’s setting the pace at the front, with Andrew Purcell/Mark Wiley & Josh Moffett/Stephen Thornton both hot on McKenna’s heels. The level of competition was obvious on the time sheets, with only 1.7 seconds separating the leading duo of Purcell and McKenna at the overnight halt.

In the 2WD section, early leader David Crossen hit trouble, leaving the door open for the Ford Escort of Shane McGirr/Liam McIntyre to take control, although they were challenged all the way. The father-and-son pairing of Jordan Hone, co driven by father Paul, had their Opel Adam R2 sitting 2nd in the 2WD race overnight, but Mickey Conlon/Ciaran McPhillips put the afterburners on over Sundays 6 stages and overtook the Hone’s and looked to grab 2nd, only for the little Opel to fire back with a scorching time on the final stage. Jordan’s impressive performance grabbed the Junior Rally victory aswell, ahead of the Peugeot 208’s of James Wilson/Gavin Doherty and Marty Gallagher/Dean O’Sullivan.

There were battles raging all through the field, with many of the Class honours being decided by the tightest of margins. In Class 4, Niall Devine/Kieran McGrath steered their Mitsubishi Evo 9 home with only three seconds to spare from Eoighan Rodgers/PaddyMcCrudden. Things were even tighter again in Class 10, with Tom Murphy/Liam Dennehy having 1.2sec to spare over rival Mike Garahy/Iarla McCarthy in a similar Ford Escort MK2.

One of the most unique battles that we see in the Forest Championship is the M.O’Brien Plant Hire Junior 1000 Championship. Open to some of the youngest competitors in Irish Rallying, the series is a huge stepping stone for the future of the Rallying world. Contesting the complete 12 stages of the rally, it was a dominant start-to-finish victory for Scottish visitors Peter Beaton/Connor Boylan in his Peugeot 107, ahead of a similar Peugeot of Rory Byrne/John Burke and the Chevrolet Spark of Aoife Gahan/Michelle Walsh.

With the stages closer to Mallow on Sunday, it was time for the movers to really do their thing. Purcell, first on the road, blitzed the 1st Loop but hit trouble on the 2nd. Josh Moffett finished Stage 7 with a puncture on the front of the Fiesta but had lost little to any time. One man though played it to perfection. In a display of cool and calm, Barry McKenna clocked down the mileage in a display of ruthless efficiency. Keeping the hard charging Moffett at bay, McKenna rolled back into Mallow to claim his first ever event victory by 12 secs and cemented his place at the top of the Valvoline Irish Forest Rally Championship standings.

Speaking at the conclusion of the event, Event COC Paul Casey paid huge thanks to the massive volunteer team, sponsors, local supporters and competitors that were all pivotal in making this the finest Gravel rally in the country, a true testament to the levels of organisation involved in running something of this scale. Its time to relax and unwind now, but you can be sure that it won’t be long until planning starts again to make the 2019 Jim Walsh Cork Forest even bigger and better! 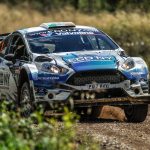 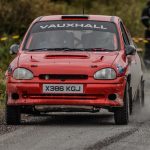